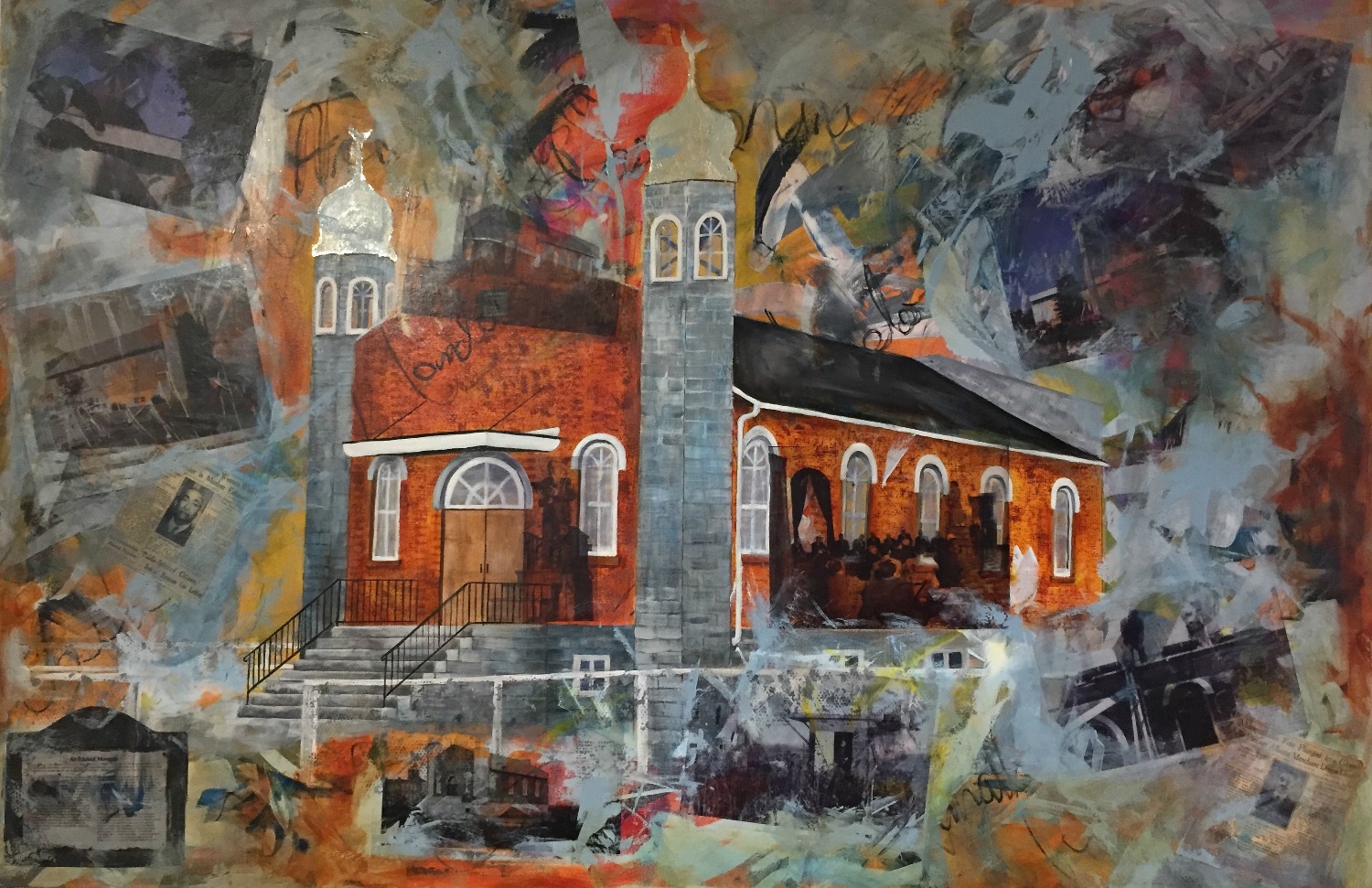 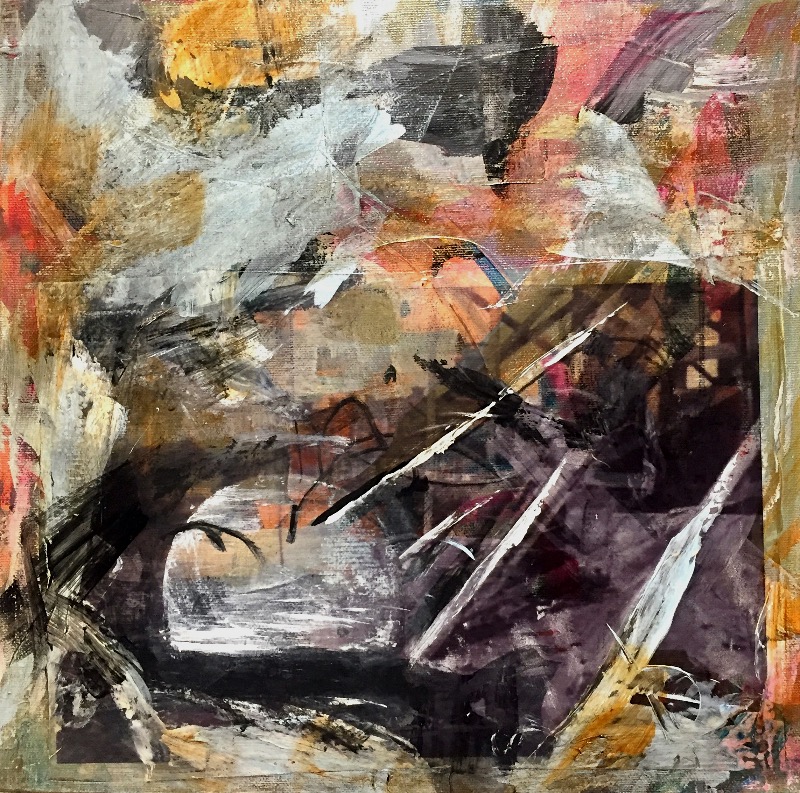 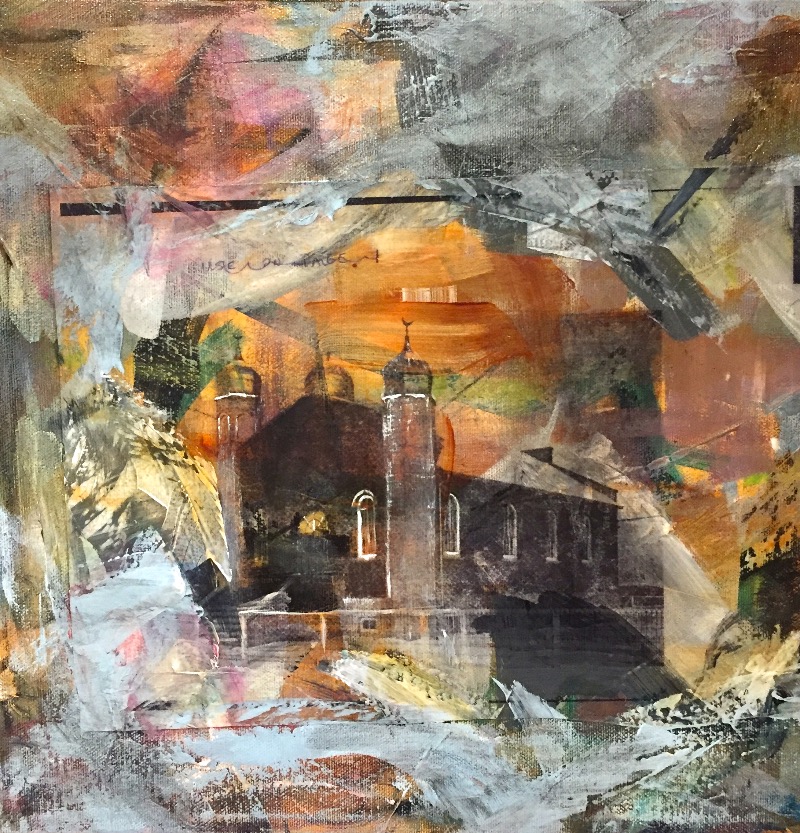 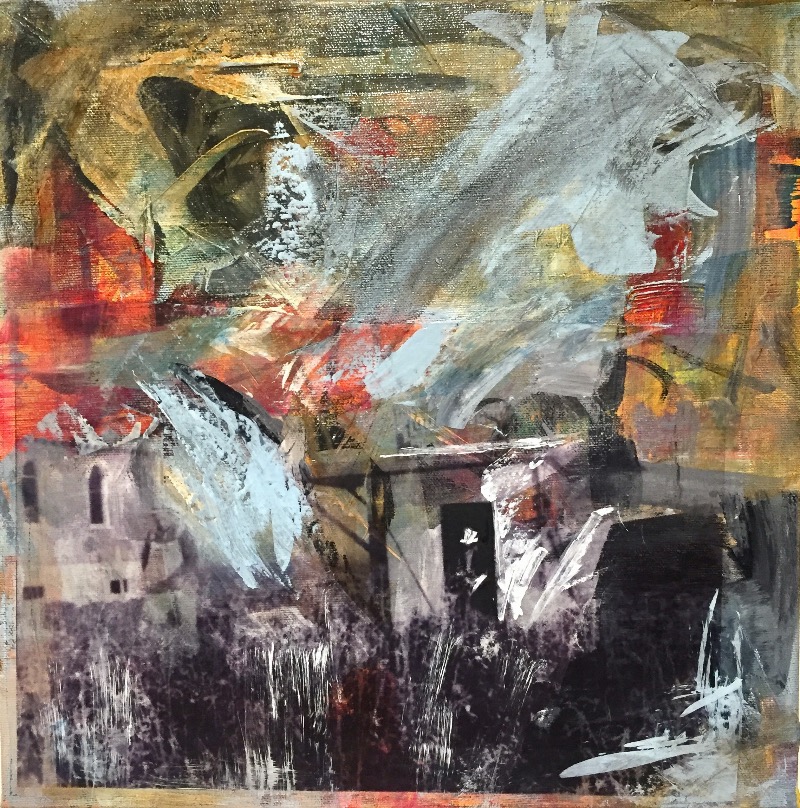 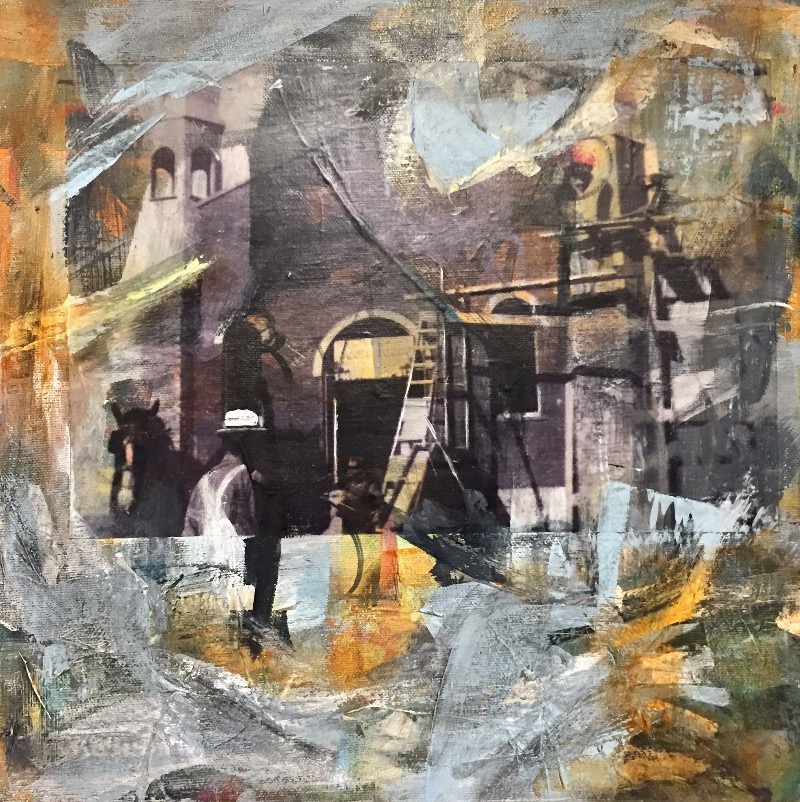 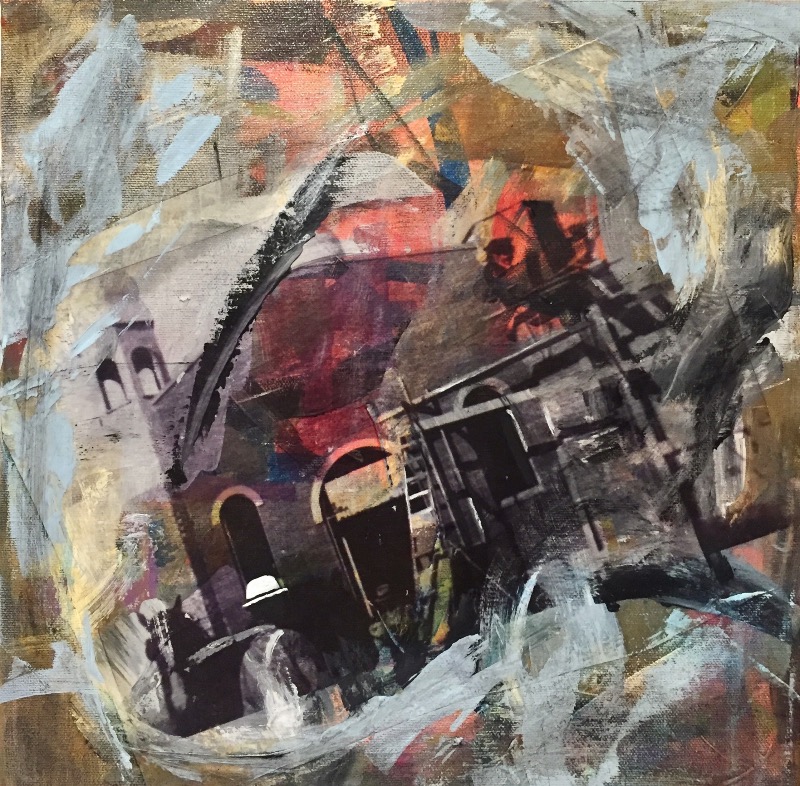 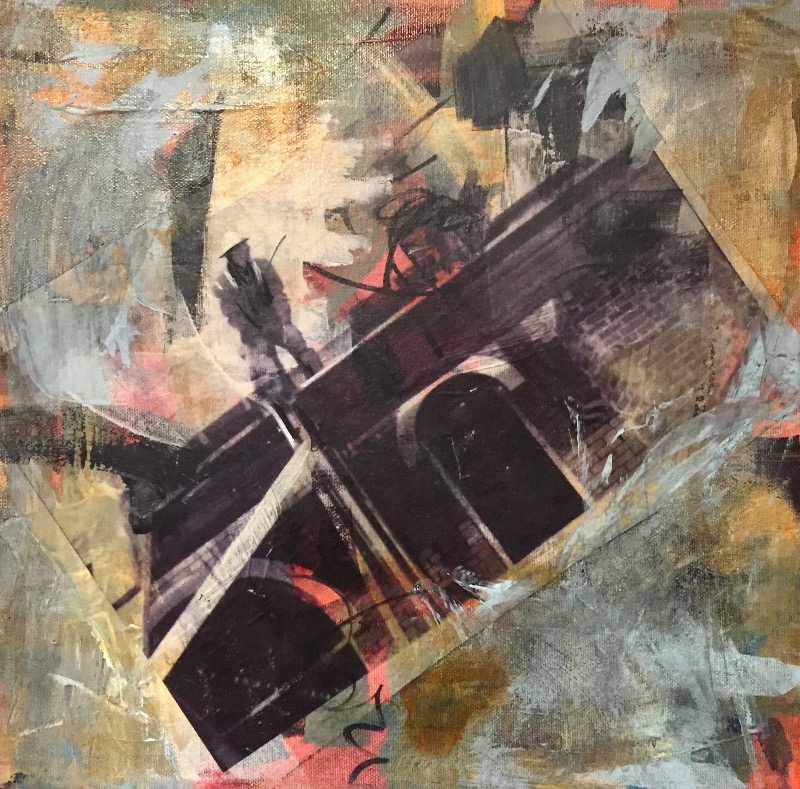 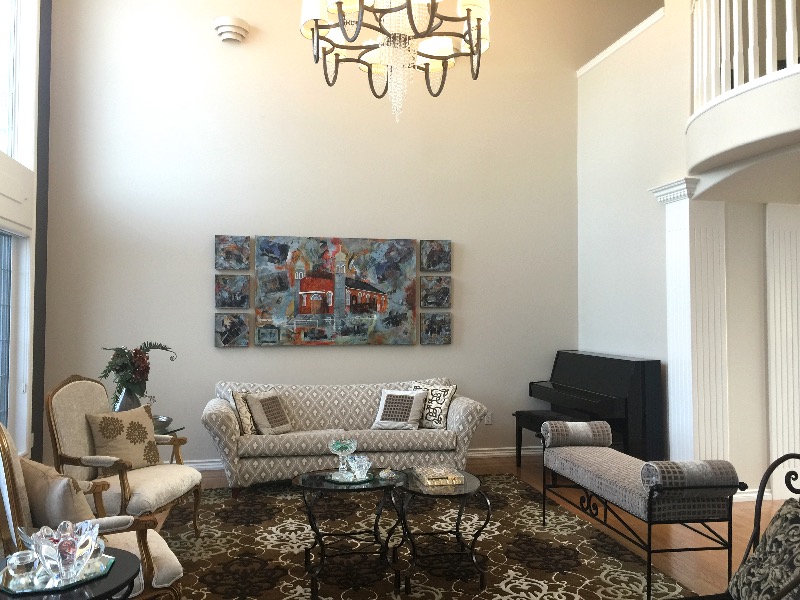 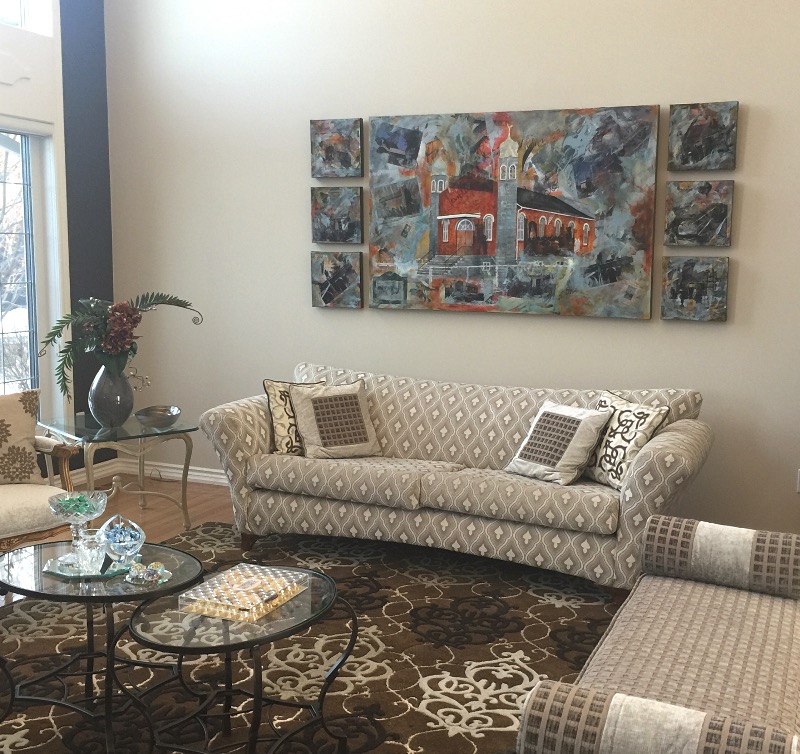 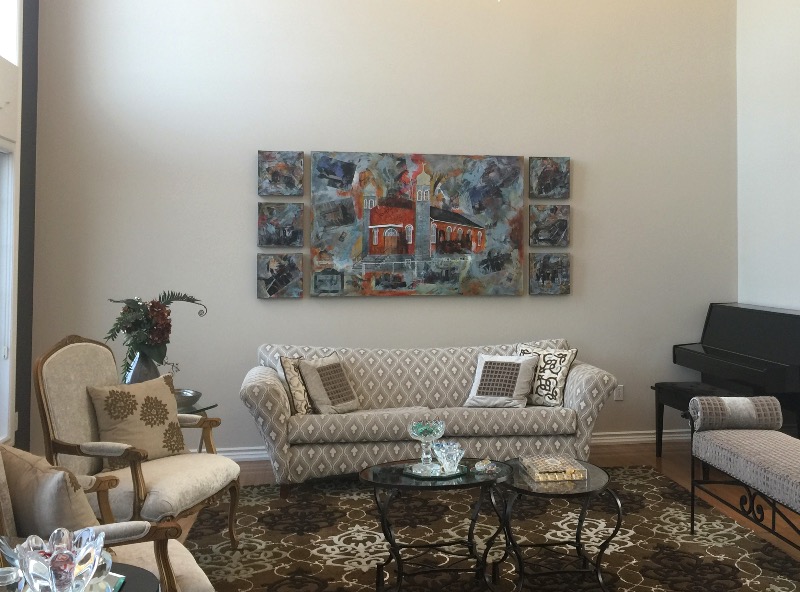 Built On Faith by Nadine Johnson

This painting represents a thread in the fabric of Alberta’s diverse history. I was inspired to create a vision of this historic landmark in honour of those who pioneered the concept of creating a vibrant and culturally diverse city, including my grandfather, Mohammed Ali (Andy) Hamdon. The unique design and architecture of the Al Rashid can be attributed to the contractor Mike Drewoth. As a Ukrainian – Canadian he designed and built the Al Rashid mosque in a style resembling Russian Orthodox churches. The Al Rashid resembles many of the churches that still remain in small communities across the prairies today.

On December 12, 1938 a dream was realized, the first mosque in Canada was built in Edmonton, Alberta. A small group of Middle Eastern immigrants worked endlessly with the help of the Christian and Jewish communities to fundraise for their little mosque. It was at this time that the community registered themselves as the Arabian muslim Association. The Al Rashid continues to use this as their legal entity in honour of the pioneers that built the first mosque in Canada. This mosque represents much more than the establishment of a gathering place; it is an example of how all cultures and peoples make up the tightly woven fabric of the Edmonton we know today. The courage and acceptance of these first settlers provided those to come with a strong canvas on which to paint their stories and to continue to develop our inclusive local and national identity. The Al Rashid historical building has and is still serving the community, it is now located at “Fort Edmonton’s Historical Park”. My parents were married in the Al Rashid Historical Building, we attended bake sales, prayer services, weddings and funerals in this beautiful house of God.

Each of the founding families names are embedded in the painting.

Love, Faith, Family, Community, Tolerance, Vision, Diversity.
The Al Rashid Mosque is representative of these words and meanings for generations of
Canadian Muslims as well as non-muslims.